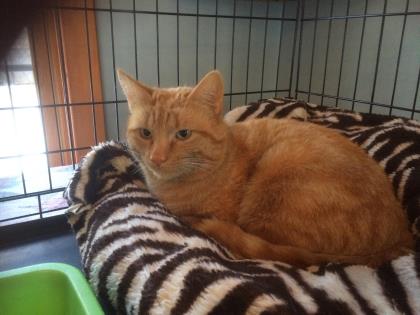 Crimson is a very handsome boy and he knows it!!

He is a confident gentle cat who loves getting attention and pets from humans.

When first rescued, he escaped from the bathroom and instead made his way to the little boy’s room and ended up sleeping on his bed with him!

Crimson is also patient and laid back. When he came in, he had an injured paw so was in a kennel for a couple of days while it healed. Afterwards, even with the kennel door open, he would usually go back in for his nap in the kennel bed. (see third picture)

Crimson is less interested in toys, regarding them as an oddity at this point, but showing more interest every day.

Optimal home for Crimson is one with people of any age who like to pay gentle and loving attention to him, with or without other animals in the home.

Crimson is neutered, microchipped, rabies and core vaccinated and has received initial flea and worm treatments.